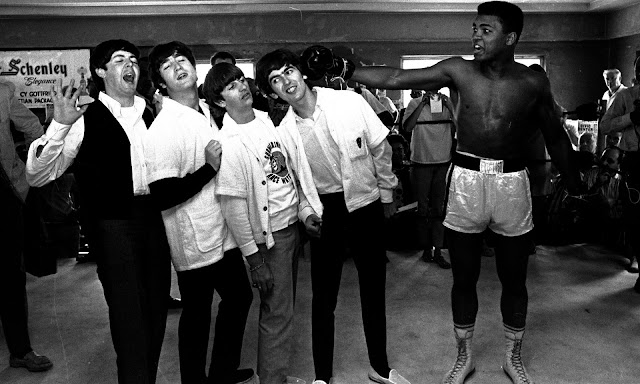 Perhaps his most famous quote was made when he was a precocious 22-year old about to take on world heavyweight champion Sonny Liston.
"Float like a butterfly, sting like a bee. The hands can't hit what the eyes can't see."
The phrase was often repeated to describe his style in the ring, and became shorthand for the man who considered himself "The Greatest" before the rest of the world cottoned on.

He could be fearsome...

"I wrestled with an alligator, I tussled with a whale, I handcuffed lightning, thrown thunder in jail, I'm bad man....Last week I murdered a rock, injured a stone, hospitalized a brick. I'm so mean I make medicine sick," he said to laughs ahead of his famous "Rumble in the Jungle" but with George Foreman in 1974,
The following year, Ali used another play on words to promote he predicted the pummeling of Joe Frazier at the "Thrilla in Manila."
"It will be a killer and a chiller and a thriller when I get the gorilla in Manila."

He could be arrogant

Ali took the art of talking himself up to new levels, reminding rivals that there was only one king of the ring.
'If you even dream of beating me, you better wake up and apologize.'
"It's hard to be humble when you're as great as I am."
"Not only do I knock'em out , I pick the round."
"I'm a poet, I'm a prophet, I'm the resurrector, I'm the savior of the boxing world. If it wasn't for me, the game would be dead."
"It's not bragging if you can back it up."
"I'm so fast that last night I turned off the light switch in my hotel room and was in bed before the room was dark."

And he could be inspiring...

"Don't count the days, make the days count."
"Live every day like it's your last because someday you're going to be right."
"Impossible is just a big word thrown around by small men who find it easier to live in the world they've been given than to explore the power they have to change it. Impossible is not a fact. It's an opinion. Impossible is not a declaration. It's a dare. Impossible is potential. Impossible is temporary. Impossible is nothing."
"The man who views the world at 50 the same as he did at 20 has wasted 30 years of his life."
Ironically, he also said, "I don't like fighters who talk too much."