Home / Without Label / Top 10 WAGs of the Premier League Stars

Edurne García Almagro, or simply known as Edurne, is an actress, singer and TV presenter from Spain. One of the greatest moments in her career is her performance at Eurosong 2015, where she represented Spain. Edurne is together with the brilliant goalkeeper since 2010. This couple is very popular in Spain.
2. Daniella Semaan – Cesc Fabregas

Daniella Semaan is the girlfriend of Cesc Fabregas. The Chelsea supporters recognize her in London, as she’s one of the most stunning girls that live in the town. Maybe Cesc and Chelsea are not performing well this season, but it seems that he solved all problems in the personal life.
3. Ludivine Sagna – Bacary Sagna

Ludivigne Sagna is a spectacular model of French-Algerian descent, born in 1988. She and Bacary knew each other since they were children, and decided to formalize their relationship at age of 17. They have two children.
4. Georgina Dorsett – Tom Cleverley

The stunning blonde and the former Manchester United player are one of the most beautiful couples in England. The footballer decided to marry Georgina Dorsett this year, and they have one child. She is an ex-TOWIE star.
5. Lorena Bernal – Mikel Arteta 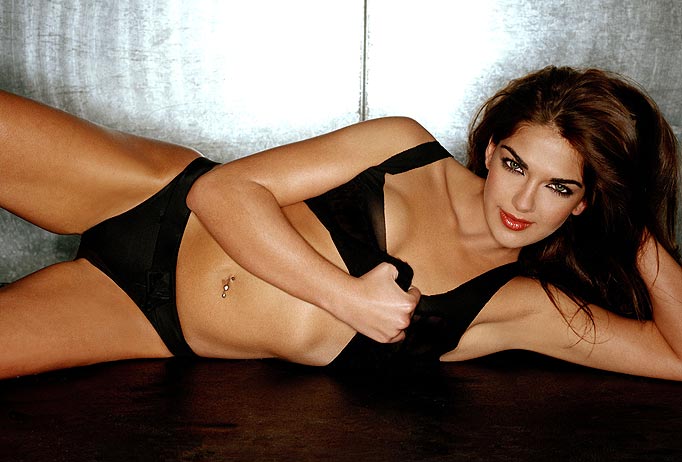 Lorena Bernal is Argentinian-Spanish model, TV host and actress. She was part of the CSI: Miami series and was selected as Miss Spain in 1999, at only 17. She is married with the Arsenal captain and the couple have three children.
6. Anara Atanes – Samir Nasri

Anara Atanes became popular after her comments towards the France head coach Deschamps, after his decision to leave Nasri out of the World Cup. She is a model and singer, and she previously dated another former Arsenal player – Freddie Ljungberg. Nasri is together with her for more than 2 years now.
7. Tanya Bardsley – Phil Bardsley

Tanya Bardsley is an English model, born in Wigan. She is starring in the reality television series “The Real Housewives of Cheshire”. Everybody thinks that she’s more popular than his husband, who didn’t succeeded to play for his childhood team, Manchester United.
8. Abbey Clancy – Peter Crouch

Abigail Marie Crouch ex Clancy is a British model and television presenter. She is born 10 January 1986 and is married to the tallest Premier League footballer, Peter Crouch. The couple are looking compatible, as she’s very tall and attractive model. Abbey was runner-up of Britain’s Next Top Model, Cycle 2.
9. Ana Ivanovic – Bastian Schweinsteiger

Schweini and the Serbian tennis star are maybe the most popular couple in the world of sport. Ana Ivanovic has very successful career and was no.1 on the WTA list in 2008. Schweini looks very devoted to his new girlfriend and they definitely look great together.
10. Viktoria Varga -  Graziano Pelle

Viktoria Varga is definitely one of the hottest WAGs in the football world. She is a Hungarian top model. Graziano Pelle is dating her for more than three years and the couple is very popular on Instagram. They met while Pelle was playing in Feyenoord, but Varga moved together with him to England. And Pelle doesn’t know only to score goals, he seems to be very romantic guy as he constantly expresses his feelings towards the top model on the social networks.